My most recent story in The Washington Post. LOVE the art work!

Assisted living facilities may be wise to appeal more to men

I noted the doilies and chintz while searching for a suitable assisted living facility for my father. Right away, I knew I was up against a powerful force. 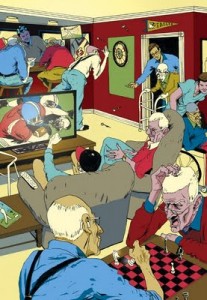 Every place I visited, I was overwhelmed by potpourri and teddy bears with bows. A typical day’s activity? “Manicure afternoons.” I was reminded of my son’s experiences with elementary schools, where teachers ask antsy boys to sit at desks and read books about ponies.

It strikes me that we don’t have a good model for taking care of men.

Where is poker night? Where’s the movie night featuring “Saving Private Ryan” or “Master and Commander”?

“Someone needs to open an all-male physical rehab place,” I tell my friend.

She thinks about this idea and says, “They could call it He-hab.”

It’s tough to fit any individual into an institution. And we navigate dangerous waters when we start generalizing about certain “types” of individuals — men, women — and their collective needs. But this much is clear: We need to think harder about men’s needs as they age and their numbers increase.

Enter the baby boomers. Last year, the first wave of boomers turned 65. According to Census Bureau figures, 22 of every 100 Americans is now 65 or older. The National Forum on the Future of Aging at April’s colossal annual Aging in America Conference stated that over the next several decades the number of Americans over age 60 will increase by 70 percent.

Boomers, as expected, are making plans. The Aging in America Conference included 600 workshops, 100 posters, 3,000 participants. One popular topic: creating non-generic, non-institutionalized care environments for specific groups of aging boomers. Gay boomers. Green boomers. Korean boomers. You get the idea. Some of the buzzwords are “aging in place” and “the village movement” — caregiving communities, rather than institutions, that allow folks to live independently among like-minded people.

Meanwhile, the Census Bureau finds that 6.5 million older people need assistance with daily living, and experts predict that number to double by 2020.

So what, specifically, do men want? Forgive a few generalizations, but men, according to experts, are tough customers.

The interiors of most facilities — built under standards known as universal design — are “not always aesthetically pleasing,” says Maddy Dychtwald, the author of three books on aging and a co-founder of AgeWave, a consulting firm on population aging. Universal design produces buildings, products and environments accessible to people with and without disabilities.

“Women tend to just go with it. Men don’t. It’s that same old story with doctors.” Women will continue to see a doctor they might not like. Men won’t. They’ll find another. Or they just won’t go at all. “Men tend to go into assisted living kicking and screaming. They don’t like to utilize the system. Women are more likely to say, ‘I can see how this place is helpful to me.’ ”

“It’s the same reason men won’t ask for driving directions or won’t consult the manual when putting together a barbecue grill,” says French. They resist. “For men, the assisted living issue is most complex in terms of attraction rather than retention. It’s easier to develop plans for a guy once he is in the facility than it is to convince him he has to go.”

The upside: Men, according to studies, benefit significantly from “the system” once they agree to use it. “At home, men are more likely than women to live a solitary, lonely existence. In a facility, they become socially engaged and benefit quite dramatically,” says French.

The challenge is to make these places more attractive to men, experts say. Floral window treatments won’t cut it. First and foremost, “men tend to gather in places where they feel physically comfortable,” says Adler. Second, we probably need to think more about how this generation of men grew up immersed in media and became savvy consumers who took their first bite of the marketing pie by singing advertising jingles along with Howdy Doody (whose show was created, in part, to sell color TVs).

“We have to change the name,” says Dychtwald. “Assisted living? There must be something else we can call it.”

He-hab, anyone?
__________________________________________
Sidebar:
To please the guys …
•Lose the chintz. Ditto the crystal chandeliers and fleur-de-lis wallpaper. Think man cave: deep reds, midnight blues.
•Can the canned music. The Big Band-era music piped into the dining room was “awful,” said my 80-year-old father. “I had a life beyond 1945.” Maybe Bob Dylan, Seal , Leo Kottke. Or silence.
• Create a “sports bar” dining spot. If they can’t offer booze to guys on meds, could they at least set aside a small dining area that looks like a bar? ESPN on large-screen TVs? Baskets of hot wings?
• Nourish the inner bro. Many assisted living facilities have a “game room”; why not make it more like a club? Possible amen-ities: dark wood paneling, a few leather easy chairs, poker tables.
• Remove all art involving pastel sunsets. My dad, a high school art teacher, suggested prints of bold, modern/abstract art classics: Mondrian, Rothko.

Gerhardt recently completed a memoir about her father’s stroke.