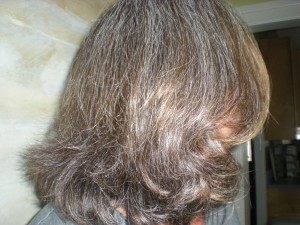 I’m at the beauty parlor (when did we start calling it a “hair salon?”) with my 11-year-old daughter and am confronted with a long row of seated women draped in plastic getting their hair colored. They range in age from 18 to 70, and they chat amicably with the stylists, also women, who stand behind them and paint pieces of hair with acrid paste, wrap them in foil, and move on to the next section as rapidly, efficiently as women in Central America making tortillas.

I’m there for a simple cut.

I am lazy. I am impatient. I am an epic fail. I have chosen to let my hair go gray.

The gray started when I was 26. A few weeks after my mother died I was standing in a smoke-filled, packed bar in Knoxville, Tennessee, and a guy, no one I knew, exclaimed, “My God! You’ve got a gray hair!” “Get it,” I told him, and he plucked it out. I thought the stress of my mother’s death was the culprit, but the gray persisted, and over the next decade I stood in front of the bathroom mirror every morning and plucked gray hairs, right along with brushing my teeth. Surely, I would eventually lose this battle.

Ten years later, I was sharing a beach house Thanksgiving weekend with my husband, two-year-old son and four friends. After a second martini, my friends convinced me to let them color my hair. We went to the drug store. “This one?” I asked Patrick, holding up a dark mousy brown that I thought matched my color exactly.

“No,” he said. “Way too dark. Everyone secretly wants to be blond or thinks of themselves as blond on some level, so the marketers name the colors to sound lighter than they really are. If it says ‘Honey Blond,’ you really are getting a very light brown.”

On some level, this was my first discomfort – the first of a series of inherent untruths.

The results were stunning.

Until I realized a month later I had to do it all over again, and Patrick and the martinis were several hours away in Philadelphia.

I would fight this war solo.

Throughout that winter, every few months I noticed my roots, sighed, and–completely sober–pulled out the bottle of color, squeezed my hands into the plastic gloves, and went to work until my arms ached.

Second discomfort:  The following summer I learned I could no longer swim laps in chlorinated water without washing out the color or (worse!) making it turn a hue of rust. I whined to women friends as we bobbed in the heat with our faces and hair, foolishly, above water, moving our arms and legs in some semblance of exercise.  According to “Going Gray: What I Learned About Beauty, Sex, Work, Motherhood, Authenticity and Everything Else That Really Matters,” about 65 percent of women over 40 color their hair. Clairol says it’s higher — 71 percent. My bobbing girlfriends accepted their fate with grace. All in the name of beauty. Not me. I was pissed.

Third discomfort:  I realized over the years that as my skin aged a bit and my face shifted, the color began to look tinny. And it made my complexion look funny. Like a corpse. I had become a member of the undead with Toasted Honey Almond hair.

Next phase: highlights/lowlights. Done professionally. All of my girlfriends swore by this. Looks natural. Lasts longer. More chlorine friendly. Three hours in a chair. $100. I could not stop squirming. I nearly blew a gasket. I had a panic attack thinking of my short life here on this earth and everything else I could be doing that afternoon: writing a novel, hiking Sugarloaf Mountain, drinking a Bloody Mary with my husband on a sunny deck somewhere. I suffered through it maybe three times until one day, looking in the mirror, approaching 50, I pointed at myself at asked, “What kind of woman do you want to be?”

“Gray,” I began to warn my family and friends. “I’m choosing to go gray.”  Just Say No to Foil Wrap.  Women in France were doing it.  Kate Moss was doing it. Smart, cool women like Susan Sontag and Annie Leibovits had always done it.

What kind of woman did I want to be? Me. I wanted to be me. This past summer, my first at going gray, I experienced euphoria (Seriously. Every. Day.) from swimming laps. No more bobbing in the shallow end. And my Saturday mornings were free from bottles of color and plastic gloves and arm aches.

At the beauty parlor I watch my daughter eye the rows of women. “What is that on their heads?” my daughter whispers. I laugh, but then I sigh. Oh, the choices she will have to make, the pressure she will endure. Color versus gray. Heels versus flats. To eat or not eat. She adds, “They look a little like aliens.”

But we don’t discuss it for long. After all, with just a cut, we are out of there in 15 minutes. As we scramble off to do something fun, I think:  If every woman in the world would just agree to not color, we could end this discussion–and gossip/stress over more important things, like whose gray is the prettiest?