The day after my sister’s open-heart surgery she said to me, through the fog of morphine: “You were crying in your sleep last night.” 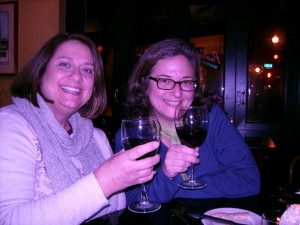 My sister (on the left) and me.

I had slept at her house. She had slept in the ICU. Even if I had cried, she certainly could not have heard me.

“I don’t think so,” I said. She nodded and closed her eyes. “You were crying,” she said definitively. “I could hear you.”

Growing up, we shared a bedroom for 17 years. A nearly telepathic intimacy comes from that experience. We understood each others’ fears. Children who share bedrooms learn to comfort, especially in the dark. My sister was a jittery child, easily influenced by that afternoon’s ghost story or seance. Many nights, she asked me, the younger sister, to move into her twin bed. “I’m scared,” she would say in the dark. Other nights, I was the one in need of comfort. The evening our little brother was hospitalized after a serious accident, Barb surprised me later that night when she whispered, “Don’t cry. It’s going to be all right.” I thought I had been concealing my sniffles into my pillow. Sometimes, we both needed comfort. Our mother died when we were in our 20s, and the night of her death Barb and I slept together, again, in one of our old twin beds – with the light on.

A few days before the surgery, I drove eight hours to South Carolina to be with her. She was ill – she could barely breathe. She had survived lymphoma 15 years earlier, and the treatment had scarred her heart.  Still, we managed to visit a friend’s lake house, take a ride on a boat, shop for discounts at her favorite department store. We were trying to have a good time, despite our fears hanging over us like a tarp. It didn’t help that a few days earlier I learned that the realtor who helped me buy my house died right after the same surgery my sister was about to undergo. I didn’t tell Barb this, but she knew the risks. She had asked the doctor if he ever lost patients. Yes, he said. Two. We woke at four in the morning the day of the surgery and drove wordlessly in the dark to the hospital. They were going to remove her heart from her body, replace a valve, replace two arteries, then put the heart back in. When they wheeled her away, I said, “See you in a few hours!” cheerfully, as if she were getting her hair done.

At this point in my life, both of my parents and dozens of relatives had passed on. You get better with death and serious illness the more often you face it. You learn to prepare. You learn to lose.

You even learn to plan a bit. Paperwork must be filed. Houses sometimes must be sold.  At the department store with Barb the day before surgery, I fingered silver bracelets on the jewelry rack and allowed my mind to briefly flutter on a negative outcome – would her 24-year-old son come live with me, up in D.C.? How would I muster strength to comfort him? Who would comfort me? But during the six-hour surgery I slammed the door shut on those questions. I read People magazine. I sang pop songs in my head. I wandered in and out of the building, clutching the pager nurses had given to me – the kind you get at Outback Steakhouse, except you don’t want this one to buzz. My sister’s  friend mercifully showed up and distracted me with chit chat.

You learn to lose, but on this hot summer day in South Carolina I was not ready. I had prepared nothing. I had no plan, other than to fall out on the floor of the cardiac unit and wail like a banshee. I was not ready to lose. Not again. Not this time.

The second day after surgery, Barb was still in the ICU, but more fully awake. I told her, “Yesterday, you told me you could hear me crying in my sleep while you were here in the ICU and I was at your house. Isn’t that bizarre?”

“That wasn’t morphine talking. I swear I heard you,” she said.

Maybe what she heard was just a memory–a little sister sniffling into her pillow–lodged somewhere in her brain, released by anesthesia or stress or the body’s terrified reaction to its blood flowing through a machine rather than its own heart. But I think something more was at work. Despite the adult brave face I had worn in the days, hours, and minutes before surgery (See you in a few hours!) the person I had shared a bedroom with for 17 years must have known:  my heart too was in need of attention.