days ago, I saw the duck couple that lives in the creek that runs in back of my house. They’ve been around for as long as I’ve lived here. At least, I like to think so. My husband, a scientist who has devoted his life to avian growth and reproduction, has warned me that ducks do not mate for life. But I choose to ignore him, reveling instead in the way the ducks glide silently along, never leaving each others’ side. They quack and submerge their heads to nibble on the water grass, and sometimes they take flight, suddenly rising above the forsythia branches that line the creek. But they never leave. Not the creek. Not each other.

They remind me of another couple I used to see everyday in my neighborhood, a man and a woman who must 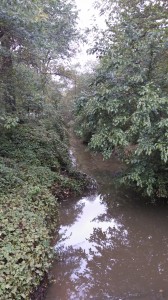 have been in their 80’s. He walked unsteadily for several years, hunched over, possibly from a childhood bout with polio. He and his tiny wife, who must have been only 5 feet tall, walked every day. And here’s the part that threw me. They held hands. Always. And they chatted and laughed with each other. After all those years together, they still listened to each other and responded and laughed. They still needed to touch. I liked how they seemed to be in a perpetual state of wonder:  noting the clouds, the breeze, the forsythia, the duck couple. When they saw me coming, walking home from my teaching job at a nearby university, they broke into exuberant smiles. We were so very pleased to see each other. Some days they were sitting down, resting on the bench on the bridge over the creek near the hopscotch painted on the pavement. “Beautiful day,” they would tell me, sitting close together, their bodies intertwined like two teenagers deeply in love, hands clasped.

I can’t be sure, but I think one day the woman did ask where I worked or why I was walking that way everyday. But we mostly just smiled and praised the day.

After a few years, I noticed he used a cane. About a year later, he used a walker. When he used the walker, his hands were occupied with the arduous business of holding up his unstable body. The couple could no longer hold hands. Instead, the woman lightly touched his forearm, like a dancer being escorted into the ballroom. They still smiled and giggled and paused to check out the blooming oleander. But they began to move very slowly – just a few feet a minute. Some days, they barely seemed able to move at all. One particularly cold winter day, I thought:  Maybe they shouldn’t be out here. They could fall. Do their children know they are here?

I never learned their names or where they lived.

One day, in between getting my kids off to school and the dog fed and sprinting toward campus, I realized I hadn’t seen them in a while. Perhaps they had moved into assisted living. Maybe they passed on.

A few days ago, pausing at the empty hopscotch bench, I realized it’s now been five years since I last saw them. I miss the way they lifted my spirit every day, the way they reminded me to make note of the little things. That’s when I saw the duck couple. There they were, floating toward me in the creek that runs under the hopscotch bridge, creating a soft rippling wake in the shape of a V.  Their bodies touched, bobbing against each other as they navigated the autumn leaves beginning to come down. My husband is right. Ducks don’t mate for life. They get together in the fall and court all winter and make babies in the spring. Then the male moves on. But they are a couple, at least for a while. I have no idea if the other couple – the man and woman – were married for many years. For all I know, they had just met when I first saw them. But I doubt it. As I watched the mallards suddenly squawk and take flight over the creek in the fading fall sky, I was glad to have at least paused and considered it — or anything at all.