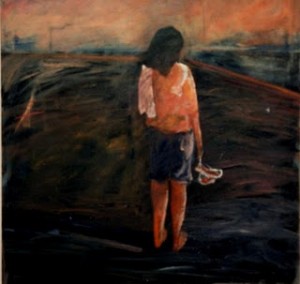 I was a VISTA volunteer for the entire year of 1990 and never told my father. I lived in a tiny, white farm house in rural South Carolina near a small town, population 1,000:   500 whites on one side, 500 blacks on the other. I taught illiterate adults how to read and write, mostly older African American women who had dropped out of school around 4th grade—to work the fields, to wipe the butts of white babies, to wash dishes for white women in town.

Dad and I saw each other often that year, not long after mom died. He was living as a bachelor in Surfside Beach, South Carolina, and my farm house was on the other side of Charleston, just down the road, as they say. We visited sunlit art galleries in Charleston, devoured fresh seafood at restaurant tables surrounded by swaying palmetto trees. We were thin, tan, transplants from a decaying city in the Midwest. We were survivors of a great loss. We were migrants from the dark.  We drank cocktails on his screened porch, debated the merits of cubism, but we never talked about my students, my volunteerism.  I told him, simply, I was “teaching” and left it at that.

Why? I relished my time with my students and feared he would spoil it for me. A social conservative in the art world, he was a rarity. He would call my service “ideal” or “liberal.” Best to keep it to myself.  Friends my age have told similar stories, hiding information from their fathers. I wonder if there is something about this generation of fathers: who grew up during the Depression; who fought the great war and returned and married and moved to the suburbs and worked and saved enough cash to buy, of all things, a washer, dryer and television; who watched, a bit dumb struck, as cultural events of the ‘60s and ‘70s twisted everything backwards or sideways.

One day, we met in Charleston for the annual, internationally acclaimed Spoleto arts festival. Artists had installed site-specific projects all over the city, many of them profoundly moving, highlighting the city’s rich, violent, sorrowful ties to slavery.  Late in the day we trudged in the 95-degree humidity up the spiral staircase to the top floor of the old Middleton-Pinckney House to see the exhibit “Honey in the Rock (Got to Feed God Children)” by Elizabeth Newman. The exhibit featured the complicated relationships between black nursemaids and the white children. Through the center of the nursery a doll dressed as a black “dah” (called “mammy” in other parts of the south) walked a tight rope above a floor dusted with baby powder. In the adjacent closet? Hundreds of tiny photos of black babies, tucked away, hidden. Old, pain-ridden, pleading spirituals played on a gramophone in the diaper-changing area. Dad was so moved by the exhibit he had to sit down on the spiral steps and catch his breath. 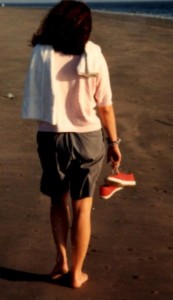 Later, we headed to the beach and walked in the fading pink glow of sunlight. “Who took care of the black babies?” Dad asked, looking out over the water. “What prompted humans to believe any of that was okay?” After a while, he took a photo of me.  I went home to my farm house. He went home to his beach house. He began immediately on a successful series of paintings, based on the photo, one of which became “Girl with Green Hair in Landscape” (which is now the title of my book and this blog).
I never told him about the year I volunteered, living on a small stipend, to teach poor, rural, black women to read and write. I think about what we withhold. And why. And the difference any of it makes. Some days, it feels like a lot.
___________________________________________
Note: The title of the site specific art comes from Psalm 81:16
I believe there is a song called “Honey in The Rock,” but I can’t find it on the Internet.  I did find an a-capella group called Honey in the Rock singing a spiritual similar to the one we heard that day.
http://www.youtube.com/watch?v=RR2h4dl7x4s